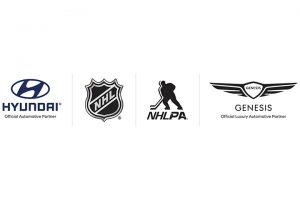 Launching this fall for the 2022-23 NHL season, the partnership represents the next evolution of Hyundai Canada’s ongoing commitment to driving hockey forward. Since 2010, Hyundai has supported community programs that increase access to the great game for youth in underrepresented and marginalized communities.

In collaboration with the NHL and the NHLPA, Hyundai will continue to foster its connection to hockey in Canada through NHL events including the NHL Heritage Classic™ and Stanley Cup® Playoffs, media exposure, and usage rights of the NHL name and logo, and current and former NHL Players through the NHLPA and the NHL Alumni Association. The partnership will also provide the opportunity to enrich shared corporate social responsibility initiatives through community engagement and joint projects.

“Hyundai has long been champion of Canada’s hockey community at the grassroots level. On behalf of Hyundai Auto Canada and our 252 dealers across the country, we are incredibly excited to expand on that, and at the highest level, as the NHL and NHLPA’s official automotive partner starting next season in Canada,” says Don Romano, president and CEO of Hyundai Canada. “At Hyundai, we’re always aiming to connect with our customers in meaningful ways, and this partnership with Canada’s premiere sports league provides us with an exceptional opportunity to engage with not only our customer base, but Canadians from coast-to-coast who share Hyundai’s love for hockey.”

“Genesis is delighted to be the first-ever official luxury automotive brand partner of the NHL and the NHLPA,” says Lawrence Hamilton, executive director of Genesis Motors Canada. “At Genesis, we believe to move forward, you must have a sincere connection with your audience and nothing connects Canadians quite like the game of hockey. We look forward to sharing this experience with customers and Canadians across the country over the coming years.”

“This partnership with Hyundai Canada brings together our shared love of hockey and driving joy and access to our game at all levels in all communities,” said Kyle McMann, NHL Senior Vice President, North American Business Development. “We can’t wait to dig in with Hyundai in the upcoming season and beyond and bring our brands to life while also elevating grassroots hockey. The NHL couldn’t ask for a better fit for our official Canadian automotive partner.”

“The Players are thrilled to be partnering with Hyundai Canada, a proven industry leader and a brand that is dedicated to supporting grassroots hockey and driving hockey across Canada,” said Devin Smith, NHLPA Senior Director, Marketing and Community Relations. “Every player has memories of hockey road trips. We are excited to work with Hyundai Canada by engaging Players in authentic storytelling from their hockey experiences through this exciting partnership.”

Further details about the partnership will be announced in the coming months.

NHL, the NHL Shield and the word mark and image of the Stanley Cup are registered trademarks and NHL Heritage Classic name and logo are trademarks of the National Hockey League.  © NHL 2022. All Rights Reserved.

NHLPA, National Hockey League Players’ Association and the NHLPA logo are registered trademarks of the NHLPA and are used under license. © NHLPA. All Rights Reserved.

Hyundai Auto Canada, established in 1983 and headquartered in Markham, Ontario, is a subsidiary of Hyundai Motor Company of Korea. Hyundai vehicles are distributed throughout Canada by Hyundai Auto Canada and are sold and serviced through more than 223 dealerships nationwide. Hyundai is also the first to offer a second-generation zero-emissions Fuel Cell Electric Vehicle to Canadian customers, called the NEXO. More information about Hyundai and its vehicles can be found at www.HyundaiCanada.com.

Genesis Motors Canada is headquartered in Markham, ON and distributes, markets, and services Genesis vehicles in Canada through a network of 30 agency distributors. Genesis is an all-new global automotive brand that delivers the highest standards of performance, design, and innovation. Genesis offers a range of models including the G70 sport sedan, G80 executive sedan, the flagship G90 sedan, and the GV80 sport utility vehicle. The brand has also just released its first electric vehicle – the GV60 crossover utility vehicle (CUV). All Genesis vehicles sold in Canada feature set, all-inclusive pricing, Genesis at Home concierge for sales and service, complimentary scheduled maintenance, a comprehensive warranty, and more. Visit www.genesis.ca to learn more.

The National Hockey League (NHL®), founded in 1917, consists of 32 Member Clubs. Each team roster reflects the League’s international makeup with players from more than 20 countries represented, all vying for the most cherished and historic trophy in professional sports – the Stanley Cup®. Every year, the NHL entertains more than 670 million fans in-arena and through its partners on national television and radio; more than 191 million followers – league, team and player accounts combined – across Facebook, Twitter, Instagram, Snapchat, TikTok, and YouTube; and more than 100 million fans online at NHL.com. The League broadcasts games in more than 160 countries and territories through its rightsholders including ESPN, Turner Sports and NHL NetworkMC in the U.S.; Sportsnet and TVA Sports in Canada; Viaplay in the Nordic Region; and CCTV and Tencent in China; and reaches fans worldwide with games available to stream in every country. Fans are engaged across the League’s digital assets on mobile devices via the free NHL® App; across nine social media platforms; on SiriusXM NHL Network Radio™; and on NHL.com, available in eight languages and featuring unprecedented access to player and team statistics as well as every regular-season and playoff game box score dating back to the League’s inception, powered by SAP. NHL Original Productions and NHL Studios produce compelling original programming featuring unprecedented access to players, coaches and League and team personnel for distribution across the NHL’s social and digital platforms.

The NHL is committed to building healthy and vibrant communities using the sport of hockey to celebrate fans of every race, color, religion, national origin, gender identity, age, sexual orientation, and socio-economic status. The NHL’s Hockey Is For Everyone™ initiative reinforces that the official policy of the sport is one of inclusion on the ice, in locker rooms, boardrooms and stands. The NHL is expanding access and opportunity for people of all backgrounds and abilities to play hockey, fostering more inclusive environments and growing the game through a greater diversity of participants. To date, the NHL has invested more than $100 million in youth hockey and grassroots programs, with a commitment to invest an additional $5 million for diversity and inclusion programs over the next year.

The National Hockey League Players’ Association (NHLPA), established in 1967, is a labour organization whose members are the players in the National Hockey League (NHL). The NHLPA works on behalf of the players in varied disciplines such as labour relations, product licensing, marketing, international hockey and community relations, all in furtherance of its efforts to promote its members and the game of hockey. In 1999, the NHLPA launched the Goals & Dreams fund as a way for the players to give something back to the game they love. Over the past 22 years, more than 80,000 deserving children in 34 countries have benefited from the players’ donations of hockey equipment. NHLPA Goals & Dreams has donated more than $25 million to grassroots hockey programs, making it the largest program of its kind. For more information on the NHLPA, please visit www.nhlpa.com.